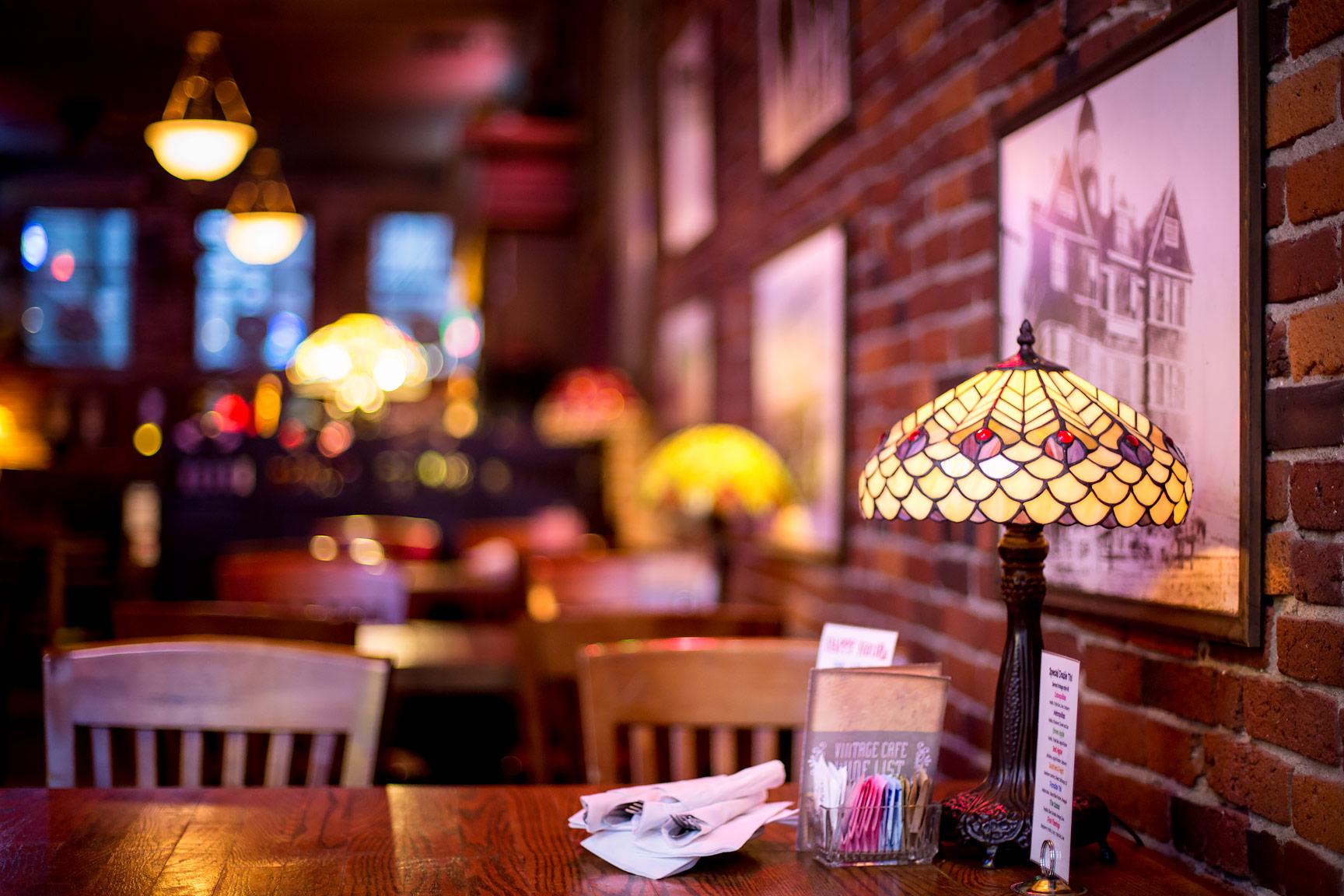 For over a year, I’ve lived about a block away from the Vintage Cafe in downtown Everett. Downtown Everett is undergoing some pretty serious revitalization so there are plenty of new restaurants to try, but I frequently prefer the charm of the city’s historic locations. In fact, I really wanted to like the Vintage Cafe, but after several visits, it’s hard to get excited about going again.

I do like the atmosphere. The early 20th-Century tone is set by the exposed brick walls of the historic building and the numerous Tiffany-style glass lamps on the tables. Even with all the lamps and the big plate glass windows, though, the dining area is pretty dark in the evenings… dark enough, in fact, that I literally could not discern whether the subject of the painting above the bar was, in fact, a nude woman, or whether my mind was playing tricks on me and it was a snowy farm scene (I sorted this out on a subsequent daytime visit. It was the former). The tables appear to be made of heavy oak,  a matching oak bar runs along the right side of the establishment, and historic black and white photos of Everett are liberally scattered across the brick planes.

I haven’t had much trouble with the service, either… though I admit that I don’t have very high expectations at a cafe. My two most recent servers were very friendly, helpful young women. I was served quickly, and they at least made an effort to check up on me a couple of times as I ate. There have been a couple of glitches, though. The Cafe has a “Seat Yourself” policy, so on my first visit, I read the sign and did just that: I sat down at a table near the front of the place and waited. Unfortunately, the waitress (apparently the only one working) didn’t notice me, so I just sat there next to the wall for several minutes until I realized that she wasn’t keeping an eye on things, and then I stood up and caught her eye. No big deal. I’ll come to the second glitch shortly.

I’m a huge fan of fish and chips, and the marquee out front of the Cafe trumpets theirs, so that was the first thing that I ordered. The ‘chips’ were just fine, and two of my pieces of fish were also good… battered rather than breaded, the batter crispy and not too heavy. The third piece of fish, thicker than the other two, was cool and undercooked in the middle, unfortunately. I was in a hurry that day, so I let it go. A couple of months later, I tried again, assuming that any kitchen can make a mistake now and then. That time, there were no problems… all of the fish was just fine, so I was very disappointed on my third visit when I was served another piece of cool,  nearly raw fish.

That time, I couldn’t let it pass. When the waitress came to check on me and inquired about the food, I told her that my fish wasn’t cooked through. I joked, “I do like sushi, though, so I could probably eat it.” The poor waitress, who had admitted earlier to being new, gave me a bewildered look and then a weak smile and said “OK…” before bustling off to another table. And that was that. There was no, “Let me get you a different one and mention it to the cook!” or “Let me deduct that from your bill!” If Smack had been there, she would have thrown down, but I couldn’t bring myself to raise the issue again and try to explain my utterly failed attempt at humor, so I ate the ends of the piece and left.

During that visit, as I sat and contemplated my situation, I heard a man who I took to be a manager or owner explaining to one of the other customers that their burgers were ground from the trimmings of their steaks, roast beef, and other high quality cuts, so I decided to try that on my next visit.

And the burger was pretty good. It didn’t taste as though it had been grilled… a little bit of char would have been nice. The beef itself didn’t taste any different than a standard burger to me, but I also remembered that I was merely jumping to conclusions from an overheard conversation; I hadn’t been told to expect anything special myself. If I go back someday, I’ll track down the manager and see what they have to say about the burgers… I’m curious. But that might not be anytime soon.

Have you had a different experience than us? Share it in the comment section below. You can also leave a rating for the restaurant by using the “Reader Rating” system at the bottom of the rating box. You’ll have the option to provide an overall rating between 1 and 10 points, but if you’d like to explain your rating in more detail, please do so in the comment section. For the sake of consistency, you might want to read about how we do our ratings first.