Hummingbird Hill sodas are truly products of the Northwest, having been first home-brewed and sold at a farmers market in Silverdale, WA in 2004. Today, the Root Beer, Birch Root Beer, and Sarsaparilla are bottled on a slightly larger scale in Silverdale, where they are distributed through local restaurants and at sold at local festivals along with their 11 other soda flavors.

It’s unfortunate, then, that I enjoy almost nothing about this beverage. When it’s poured, it generates about as much head as you’d get from mineral water (ie, none). Overall, carbonation is actually very similar to what I’d expect from club soda; it’s heavy and sharp at first, but it dissipates quickly.  In fact, it’s pretty likely that this stuff is now made by adding some flavoring to carbonated water (rather than being properly brewed), which makes the scent of the beverage a little confusing: the first aroma that hits my nose when I near the bottle is yeast.

The flavor of yeast is also prominent on the tongue, along with the birch. It may be that there’s no yeast at all, and that the birch flavoring used simply reminds me of yeast, but either way, it’s not pleasant. Even less pleasant is the aftertaste. My notes describe it as “yucky”. Beyond these first impressions, the flavor profile is pretty empty. In fact, that’s the word I think best describes this root beer: empty. It’s missing something, and a lot of it. It’s certainly not sweet enough, and it’s lacking any of the smooth flavors that would fill it out, like vanilla and other spices (though vanilla is listed in the ingredients). It ends up being almost watery, with that lingering aftertaste. Ugh. 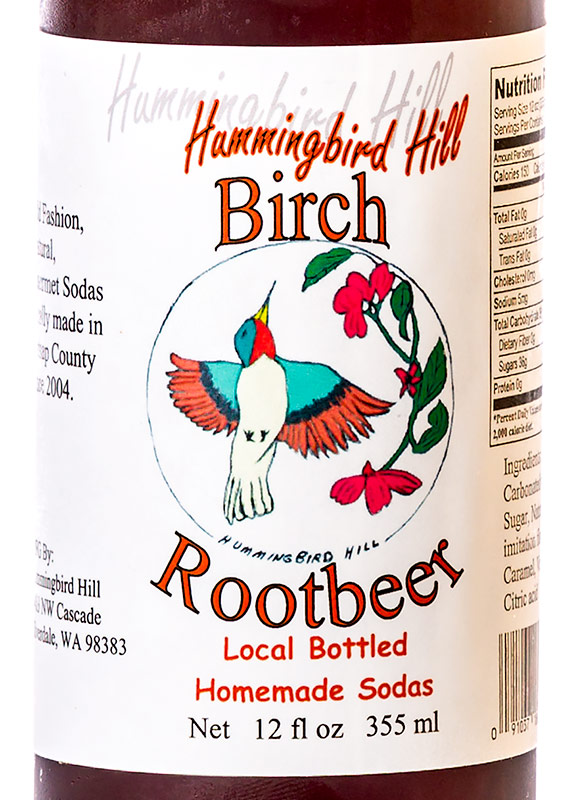 Hummingbird Hill’s label. Why is the top text doubled? Is that supposed to be a shadow?

And as long as I’m being disgusted by this root beer, let me mention how put-off I am by the haphazard label design. It was quite obviously home-made ( which is admirable), but it commits the cardinal sin of typography: they use Comic Sans! But that font is just one among the five completely different typefaces that are featured within a three inch radius of the logo. The inexpertly drawn hummingbird would be forgivable if trying to figure out the perspective didn’t make me feel as ill as the thought of drinking three bottles of this stuff (why is that distant wing so much bigger than the near one?!). The fact that they combine “root” and “beer” into a single word is annoying but relatively common.

All of this is unfortunate, because I really like the idea of a local, mom-n-pop root beer.  Luckily, this is all a matter of taste. If there weren’t someone out there who liked this stuff, they wouldn’t still be in business after ten years… so maybe you’ll feel differently about it than I do. They certainly have a unique flavor, and if you prefer a beverage that is not as sweet and not as rich as other craft root beers, you may like this one.

As usual, you can add your own rating to this root beer. I’ve given it a 3/10. For my root beer reviews, the overall rating is NOT a combined score from all of the individual characteristics; those are just provided for quick reference.

[Main Photo: This image provides a comparison between Hummingbird Hill Birch and A&W Root Beers, with A&W on the right. Both were poured at about the same time.]